Realization: Drilling drinking water for a rural population of 1400 habitants

Following a request from Zoungodo’s residents and AJEED association met several times, we undertook examination for a drilling in the primary schoolyard of the village.

An exploratory mission has been done in 2015.

A feasibility study has been realized in order to insure the presence of water in the ground.

It is now a rural population around 1500 persons which benefit drinking water at a very low cost. The sale of water allows to make a financial reserve in order to insure the maintenance of installations. The school benefits water free of charges for the kids and meal preparation.

In April, 2016 later 65 m of depth the invaluable liquid surfaces.

In May the works of masonries continue the results of the analysis of the water return satisfactory.

In June, the rustic committee of the water was established, it has the load to manage: the sale, the profits, the maintenance (change of the filter every 3 months), the purchase of the gasoline, the payment of the employee of the distribution of the water and the analyses of the water.

The distribution and the sale starts in …….

A follow-up visit by the team of GHA is planned in October or November 2016. 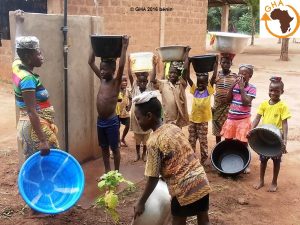 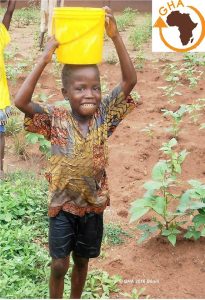