Health projects can be of several kinds, GHA concentrates mainly on water drinking supply, but we can also provide a financial and logistic help in order to solve urgent health problem on a case by case basis.

Objective: To undercut the infante mortality.

Activity: To implement the medical of a ten years child up to his healing. 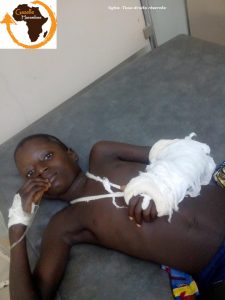 State of the project: Finished

Chance encounter of Benga from Djegou Nagot village in Benin during a ground visit for the water forage in April 2014.

This child shows an oedema and a localised inflammation, an open point exuding and a closed inflated wound on the left arm at the level of radius and cubitus since three months.

It will appeared that there were two open broken leg after Benga falls down in trying to catch up a parents’ cow.

One of an open wounds under the elbow is closed, the second at the wrist is always open and exudes under a dirty rag.

The were no possibilities that this trauma cures by itself. The open broken leg can have infected the bone.

The prognosis for survival is engaged and justify an urgent care, GHA takes the decision to support the family with their agreement and to organize the health monitoring for this young boy.

Today, Benga is a post operative patient, its days aren’t life-threatening desease and after five months, he is with his family in the village. 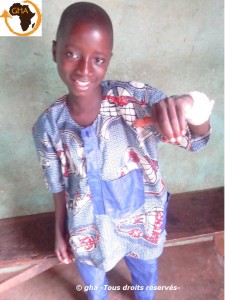