Object: Renovation of a primary and nursery school.

Status of the project: on

Olmoti is a big community without economic activity other than the family breeding, isolated and outside public authorities. She is located meadows of the Tanzanian border and the national park of Amboseli. This community distant from urban areas, is on the corridor of Kitenden. (Thousand-year-old migratory Road of the elephants).

The school of wooden origin was dilapidated and attacked by termites and without any school equipment. 12 small desks, lent from time to time by the nearby church, could not naturally allow 88 children to sit down and to work in good conditions.

In the urgency, in 2012 GHA made 40 double wooden desks do, and has to buy 80 uniforms and distributed school stationeries.

But other works were to plan …

In 2013, GHA allowed the realization of a new paving stone in cement for the class and the addition of a guardrail everything around the school.

In 2014, GHA supplied a tank with water inside the court of the school.

We learn, during our visit to the office of “Education Ministry de Loitokitok” in June, 2014, that further to our help, this community is going to benefit from the construction of a classroom hard.

In 2017, GHA plans a piece of news(short story) a new stage of renovation. 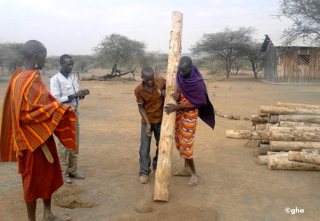 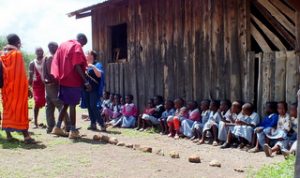 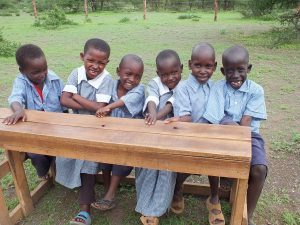